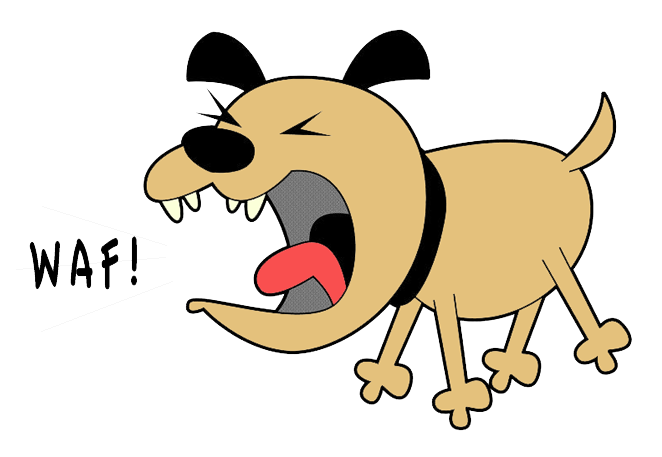 Sucuri Cloud Proxy is a very well known WAF capable of preventing DOS, SQL Injection, XSS and malware detection and prevention. It acts as a reverse proxy which means that all the traffic sent to an application behind Sucuri WAF would be first sent to Sucuri’s network which (based upon it’s signature database) would check if a particular request is legitimate or not, if it’s legitimate it would let it reach the application otherwise it would blocked.

Due to the fact that Sucuri’s Cloud proxy utilizes a Blacklist based protection to prevent application layer attacks, it caught my interest as it has been proven time after time that blacklist based protection is insufficient when attempting to block application layer attacks specifically Cross site scripting, as there are countless ways javaScript could be encoded/represented to bypass the protection and thereby it’s very difficult to construct a filter that is capable of blocking all possible combinations while yielding minimum false positives. An example would be Mod Security, they have a Strong XSS filter, However it generates a lot of false positives and in most cases it blocks normal/harmless text. 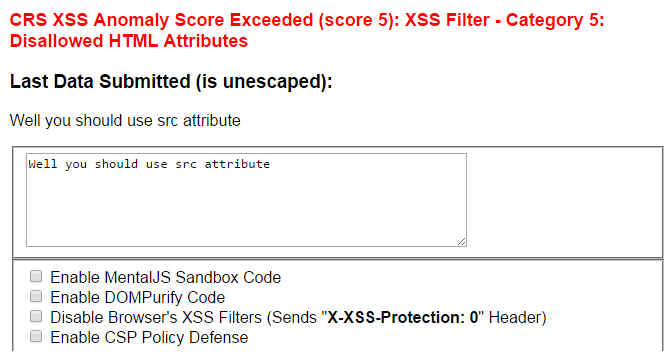 As you can see fr that a completely harmless text triggers an alert, as the regular expression is checking for any thing before and after “src” attribute. 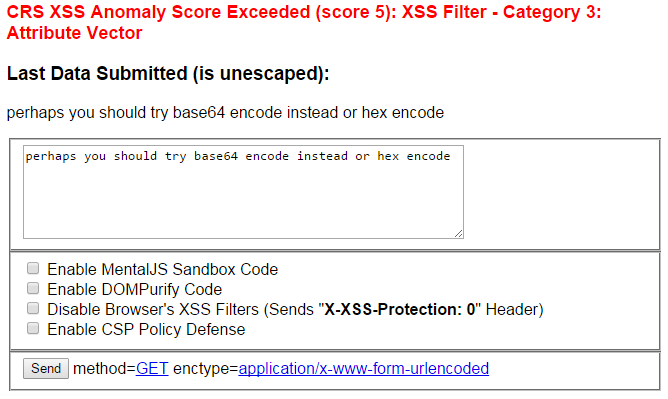 Notice that in this case as well we have a valid and completly harmless text being considered as an XSS attack vector.

Let’s get to the main topic, In this post i would be revealing one of the many bypasses i found for sucuri’s XSS filter. The full bypass works with user interaction, however given that you follow the given methodology you would easily be able to construct a bypass that does not require user interaction.

As per the following link Sucuri’s cloud proxy has a built in XSS filter capable of detection and blocking XSS attempts. “Our CloudProxy firewall does protect your site against XSS script injections if you want to prevent them from ever being used to compromise your site“. So I decided to test the effectiveness, however due to absence of testbed i had to attempt it on a live website. So let’s get started.

The following is the methodology I utilize when i am up against any WAF:

i) Brute Force (Throwing random payloads and known bypasses for other filters to see if they are able to bypass the filter)
ii) Regex Reversing (The rules are reverse engineered to see what is allowed vs what is not allowed to construct a bypass)
iii) Browser Bugs (When (i) and (ii) fails, I go with browser specific bugs such as charset inheritance, RPO etc and other quirks)

I made initial tests with tons of different vectors, however i quickly figured out that Brute forcing would not be the way to go about bypassing this filter.

During my tests i found that <a tag along with href attribute was allowed. However i found that as soon as i enter anything after the = my vector is blocked.

I thought perhaps they are detecting the regular expressions expects a SPACE after anchor tag, so i tried forward slash (/) however it was blocked.

The next option was to try characters that could be used instead of white space such as x0c which stands for “Form Feed” or perhaps newlines.
http://www.site.com/shop.php?c=4“><a%0c href=http://www.google.com>CLICK</a>

I came to the conclusion that the regex only looks for a “Space” and “Forward slash” between a tag and href attribute. However, i since Form feed only works in google chrome, i didn’t wanted to generate a browser specific bypass. So, i used the following vector.

Here is how the input was being reflected.

The next step was to use javascript, scheme to execute javaScript, however as expected it was being filtered out.

The next step was to check if the regex is filtering out case sensitive payloads. However, it was also being filtered out.

The following test was made to check if the regex was looking for a colon followed by javascript keyword.

With above test it was clear that the regular expression is looking for “Javascript” keyword followed by a “Colon”.  This could be easily defeated by using HTML entities such as &sol &tab &colon &NewLine. Apart from that parenthesis were also being blocked which could also be easily bypassed by using their corresponding html entities i.e. &lpar; and &rpar;.

Inside of href attribute &colon; could be used instead of “:” which would be decoded by the browser at the run time.

However, as could be seen from the above figure the html entities are not being reflected back. This could be easily defeated by using hex encode to encode & and ;  signs.

Combining all pieces of puzzle leads to full bypass: 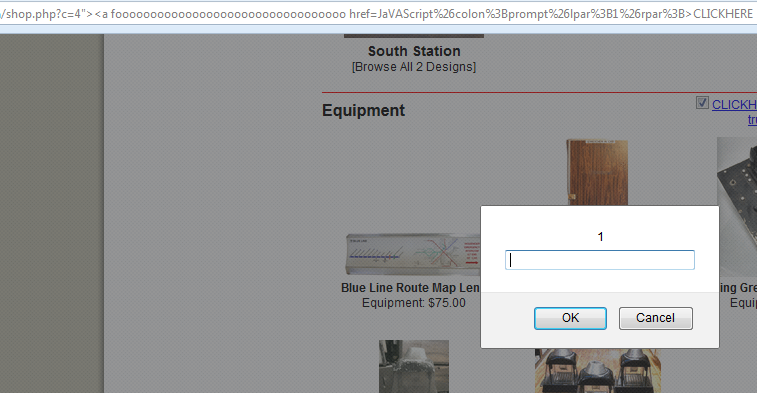 Both the website owner and the vendor has been notified about the vulnerability.

Update2: It seems like securi is now blocking “Prompt” as well as the “Confirm” keyword, the following vector bypasses it –

Update 3:  @soaj1664ashar found another way to bypass the filter:

Update 4: Mathias Karlson used a neat trick to yet again bypass Sucuri XSS filter, he figured out that a=”b” i  added a little bit of css magic to make user interaction unavoidable.

The above bypass could be combined with with css magic to bypass it with unavoidable user interaction.

We’d Like, Totally Carry This Retro Boombox Cyberdeck on Our Shoulder