Ode To An AVO 8 Multimeter 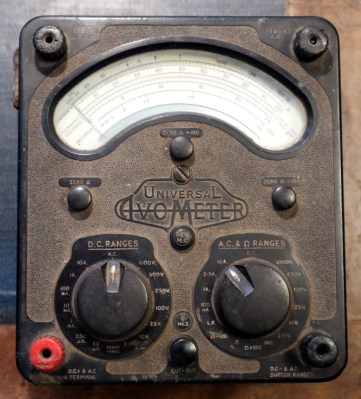 I’m moving, and in the process of packing all of my belongings into storage boxes to disappear into a darkened room for the next year. Perhaps I could become one of those digital nomads I hear so much about and post my Hackaday stories from a sun-kissed beach while goldfish shoals nibble at my toes. But here in a slightly damp British autumn, box after box of a lifetime’s immersion in tech needs sorting and directing. Why on earth did I hang on to three Philips N1500 VCR system video cassette recorders from the early 1970s! (Don’t worry, those have found a good home.)

Say Hello To An Old Friend Of Mine

As I was packing up my bench, I happened upon a multimeter. I have quite a few multimeters and this isn’t the first time I’ve written about these indispensable instruments, but this one’s a little special.

It’s a treasure from my youth, that most venerable of British test equipment: the AVO 8. This was the ubiquitous multimeter to be found in all manner of electrical and electronic workshops across most of the 20th century, and remains to this day one of the highest quality examples of its type.

It’s a relatively huge Bakelite box about 190mm x 170mm x 100mm in size, and it is instantly recognisable  by its dual rotary selector switches and the window for viewing the needle, which forms a characteristic circular arc kidney shape.

The earliest ancestors of my meter appeared in the 1920s, and the first model 8 in the early 1950s. Mine is a Mk III that a penciled date on the inside of its meter movement tells me was made in November 1965 and which I bought reconditioned from Stewart of Reading in about 1991, but manufacture continued until the last Mk VIII rolled off the production line in 2008. It’s to my shame that my AVO is a bit dusty and that maybe I haven’t used it much of late, but as I picked it up all the memories of using it to fix dead TV sets and set up optimistic experiments in radio came flooding back. If there’s one instrument that connects me to the youthful would-be electronic engineer that I once was, then here it is.

A Very Different Approach To A Meter

To fully appreciate the AVO 8, it’s time for a teardown, for a glimpse both at how a very high quality analogue multimeter is built as well as how such things were designed at the dawn of the Jet Age. Dismantling it is very easy, a couple of screws allow removal of the battery compartment cover on the side above the meter, and six screws in the sides of the meter undo to allow the Bakelite tub to be eased away from the front face.

It’s first worth a quick peek in the battery compartment, where there would be two batteries for the various resistance ranges. One is the familiar D cell while the other is a BLR121, a curious 15 V pile of cells of the type once used in devices such as hearing aids and camera flashes. This cell is still available from specialist suppliers for AVO owners, but another option has been to incorporate a little switching regulator to generate the required potential. The battery compartment as well as the high-voltage terminals make contact with the rest of the meter via a series of brass stand-offs that engage with springy metal fingers as the case is closed, and on the back of the battery case are mounted the high-voltage dropper resistors.

Turning attention to the meter itself, and immediately we are in a world of electronics from another era. The meter movement has a full-scale deflection of 50 μA and us a significantly substantial affair whose magnet alone is larger than many modern panel meters in their entirety. The parallax mirror is a substantial piece of glass mirror fixed to the back of the scale — a nice touch.

The rotaty switches don’t use the tag-and-wiper method you might expect, instead relying on a set of springy copper finger contacts of the type you might see in older relays, that are pushed down by cams on the rear of the knob mechanism.  At the bottom is a substantial cut-out mechanism, and as a demonstration of the engineering quality its latch has a ruby bearing you might otherwise expect to see in a wristwatch.

Above the switches and cut-out are a pair of insulator bars that serve as both an array of solder tags for wiring as well as support for wire-wound resistors and discrete components. There is also a transformer for the AC ranges, and a high-current shunt resistor made from a coil of brass strip. Having the meter open on the bench surrounds it with that wonderful old-electronics smell of phenolic resin, and suddenly I have the urge to work on a vacuum tube TV from the 1950s again.

It’s clear then that the AVO remains an extremely high quality instrument, and is still a useful and accurate multimeter well into its sixth decade. I feel guilty then that I’ve neglected it in favour of a digital meter that cost an order of magnitude less. So why has it remained on the shelf then? An obvious answer might be that as an analogue meter its 20 kΩ/V sensitivity can’t match the high impedance of its digital rival, but that’s probably not the real reason. It’s seductive to carry a feather-light handheld unit rather than one the size of a medium-sized building block. That’s the real benefit of modernity: miniaturisation. I’ll try to use the AVO more on the bench because it’s a fantastic instrument. But will it regain its place as my main meter? Probably not. After all sometimes it’s better to stay in 2020 rather than 1950.

Building a Workshop Crane From Scratch

Building a Workshop Crane From Scratch

Alfa Romeo Gauge Cluster Gets a Fresh Set of LEDs

The United States Of Startups: The Most Well-Funded Tech Startup In Every US State

Attacks are rising in all vectors and types

Top digital security worries when it comes to remote employees